Here are the 4 pieces I completed for the 12×12 exhibit at Golden Belt: 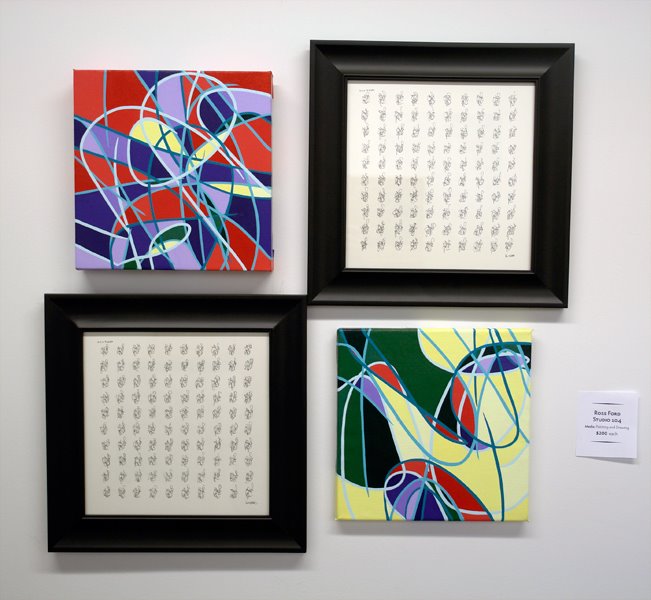 All of the work for this show had to be 12×12 inches.  I do not normally work in a square aspect so I had to get a little creative.  My first inclination was to do square drawings as these pieces are easy to adapt to different sizes.  My paintings tend to be rectangular in shape and 12 inches is smaller than most paintings I have done. In fact this size tends to be harder to complete than larger works because the complexity of my recent work does not translate well at this size.  The lines would have to be much thinner, which is difficult with the many layers I usually use.  The compromise was to crop a larger image to 12 inches square.  Several people have been asking me to do cropped images since I first posted Number 414 with the close up.  I have resisted this for several reason but mainly because I feel that the crops represent another level of editing, setting them apart from the larger set.  It’s not that they are totally other, it’s just that they represent a further subset that is not conceptually consistent with the current set.  In order for these to be consistent they would have to be several crops from the same image, so that each iteration represent the same level of editing from the initial expression.  I don’t know, maybe I am over thinking it.  The other major reason is that each figure is a complete expression, and to take part of the expression denies the wholeness of the figure.  Unless this editing is applied universally, it makes each of the iterations too distant from those occurring before an after.  Anyways, these are two experiments, and for the reasons outlined above are not numbered, merely dated.  I finished them early Thursday, December 15th before the preview of the show.