My recent multi-linear paintings have all overlaid intersecting lines to create specific figures.  These have all been specific choices and also immediately whole; meaning that I draw the figure all at once and specifically choose which lines overlay when painting.  The recent series of prints have involved multiple separate whole figures overlaid to mimic the multi-linear effect of the paintings. 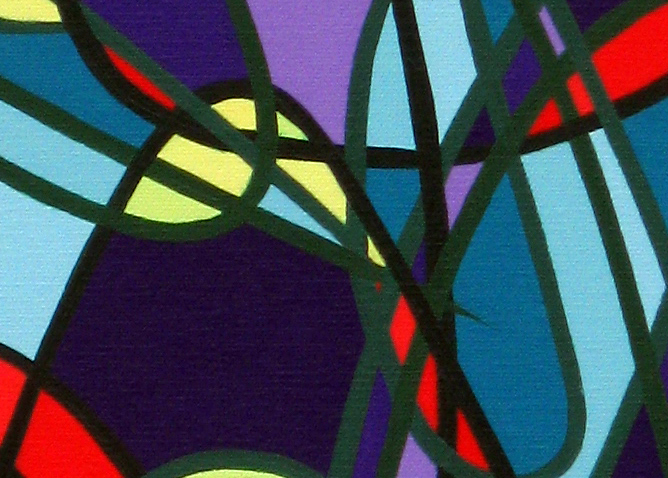 I say these are immediately whole because the drawings are done all at once in one continuous motion, and the overlay is chosen after, when I am painting. 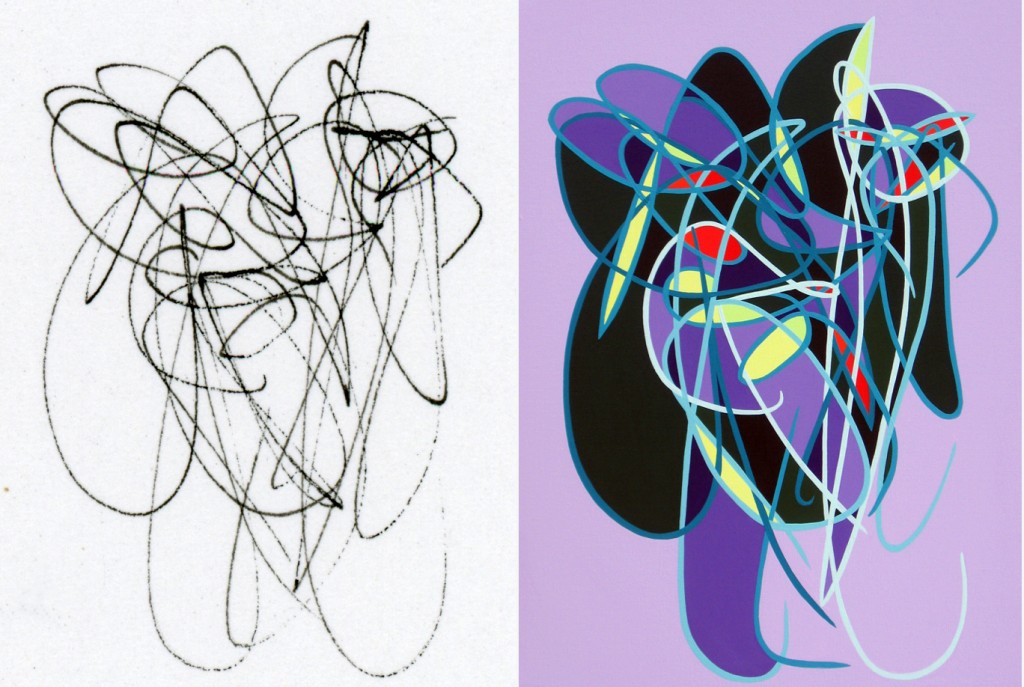 Number 417 with the original sketch from 6/5/11 - This shows the original figure was drawn all in one motion at one time. There are multiple strokes in the drawing (some of which are do to the pen "skipping" because of the speed) but there was no conscious pause or switch in colors. Each stroke was still part of the same brief moment.

The colors were chosen during the act of painting

The current set of prints are made by overlying 3 ‘complete’ but comparatively simple figures to approximate the complexity of my recent paintings. All of my work features several similar shapes repeating in different chaotic combinations to produce unique figures.  By overlaying several complete shapes and varying the registration, chaotic differences emerge in the  finished prints.  I feel this builds on the conceptual basis of my work in infinite variation.

Since each print is composed of the same elements, combining them in different ways allows us to examine the ways the elements are similar and different. This is an expansion of the same ideas in my large drawing installation in Further Complications.  That installation allowed the viewer to compare and contrast 7920 individual consecutive moments on the same plane, in order.  The prints remove the elements of order and time; instead directly comparing shape by placing the images over one another.  By not trying to control the registration of the screens I introduce a chaotic element into the iterations that allows different shapes in the stroke to be contrasted.

Here are the original elements:

Here is the first variation, in Red, Orange and Turquoise: 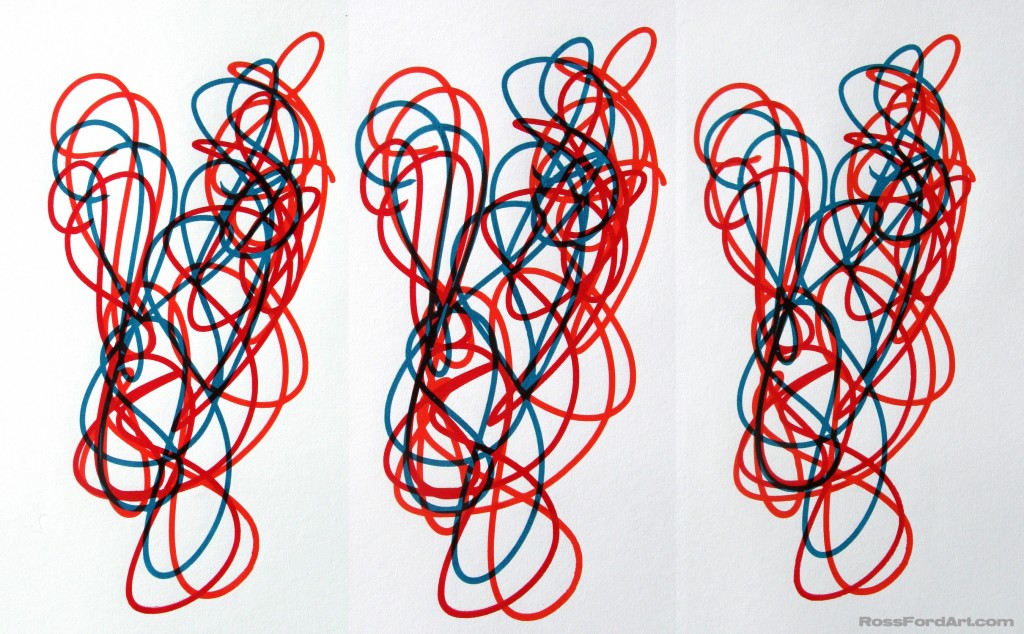 3 variations in Red, Orange and Turquoise. Click the picture to view it full size.

Here are another 4 variations in Orange, Turquoise and Chrome Oxide: 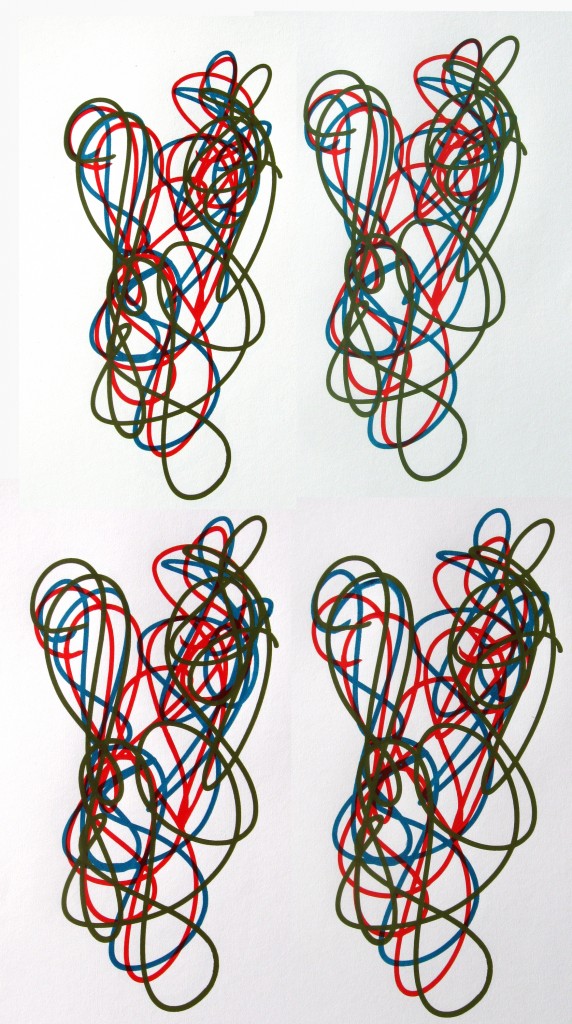 4 variations in Orange, Turquoise and Chrome Oxide - click on the image to view full size.

The final print I did of this set is in Turquoise, Green and Brown: 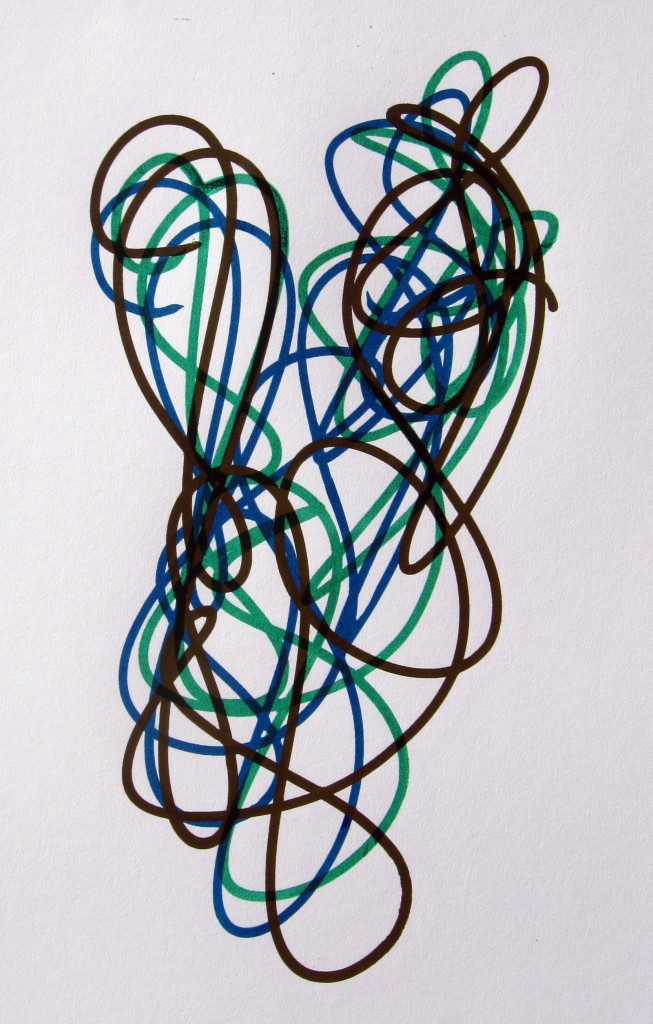 The final variation in Turquoise, Green and Brown. I only did one in this color combination.